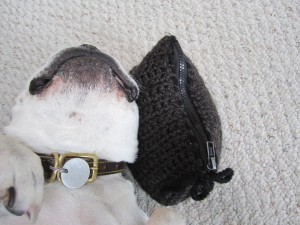 The effect of the bag on canines and homo sapiens alike!

The first time I broke out my creation was on Christmas Day, 2007. My sister grabbed it wide-eyed and said, “Did you make this?!” I smiled. “I want it!” She said, holding it possessively to her bosom. I tilted my head and thought, I should give it to her. Then I realized I couldn’t part with my little bag for the world. “I’ll make you one.” I said instead. She smiled hopefully.

Several months later my mum spied my little crocheted bag and actually said, “Will you give this to me? I love it.” Uhg! How can I say NO to the woman who bore me into this world? Somehow I squirmed my way out of giving it to her without saying no. (I finally made her one and gave it to her last Christmas.)

Years later I was having dinner at Sodini’s in North Beach with my favorite cousin Vanessa, and I didn’t want to bring a purse, so I just brought the bag. It’s the perfect size for my necessities: cell phone, keys, glasses, lipstick, powder, mirror, aspirin tin, bobby-pins, finger nail file, money, I.D. All neatly zipped up with the beautiful plump of Marilyn Monroe in a sweater. When we sat down I placed it on the table and she said almost sadly, “I have always coveted your little knit bag.” “Crocheted.” I softly corrected her. This is a woman who I admire to no end. She has survived so much in her 32 years, is an amazing mother to my 8 year old cousin with disabilities, and she has the most beautiful skin I have ever encountered. “I’ll make you one.” I said, smiling humbly. Very matter-of-factly she said, “No you won’t, you’ve said that before.” I was petrified. After a heartfelt apology, I promised that she would have one within the year. She nodded politely, but I could tell she didn’t believe me. I made her a bag and gave it to her at my husband’s birthday dinner last December. She squealed with delight when she opened the wrap and filled it up with items she had with her. Then we placed our bags together on the table for a photo op. 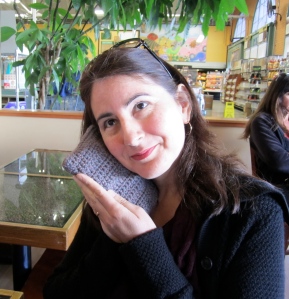 After years of waiting...my sis is requited.

These are just a few examples of the affect my little crocheted bag has had on people over the years, and I could give many more. Like the time we were invited to a local church’s spaghetti dinner – to hear comedian Mark Gungor speak. I had just taken too big a bite of my pasta when a woman from across the table snatched up my bag and said, “Did you make this?!” Swallowing hard, I nodded, smiling with sauce on my lips. “It’s cute.” She said rather enviously, glancing at her heavy leather Coach bag, then hesitantly she put it back where she found it. Wow I thought, even churchgoers are crazy for the bag!

So, I decided last year to start my own line of G.F.M.G. bags, called Sailor Bags in honor of my boy Sailor. I’m still working on a tag/logo to go inside of each, but I’ve crocheted about thirty so far and half have their zippers sewn in. It’s not cheap creating these little bundles of joy, but I’m looking at it as an investment. I can’t wait to put them on etsy.com or I can sell them down at the harbor this summer. Either way, I look forward to spreading the joy my little bag gives me, to others. And the dough wouldn’t hurt either.